Back in August we conducted a quick and Experimental Authentication Survey of the EmailKarma inbox, what we found was that 50% of messages received in the month of August were not being authenticated correctly. 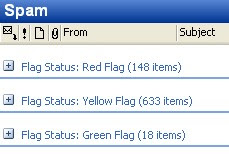 The other item of note is our spam folder has 2% (up from 1.5%) of email passing authentication, with the majority of these messages (79%) having no records at all, meaning these domains are venerable to attack and forgery.

October’s Ham to Spam ratio is running at a solid 89.1% which is slightly better then August’s 91% spam percentage.

The holidays are coming – make sure all of your email is authenticated to help your inbox placement and to protect your brand.

Why is your ‘from’ Address so Important for Email Deliverability?